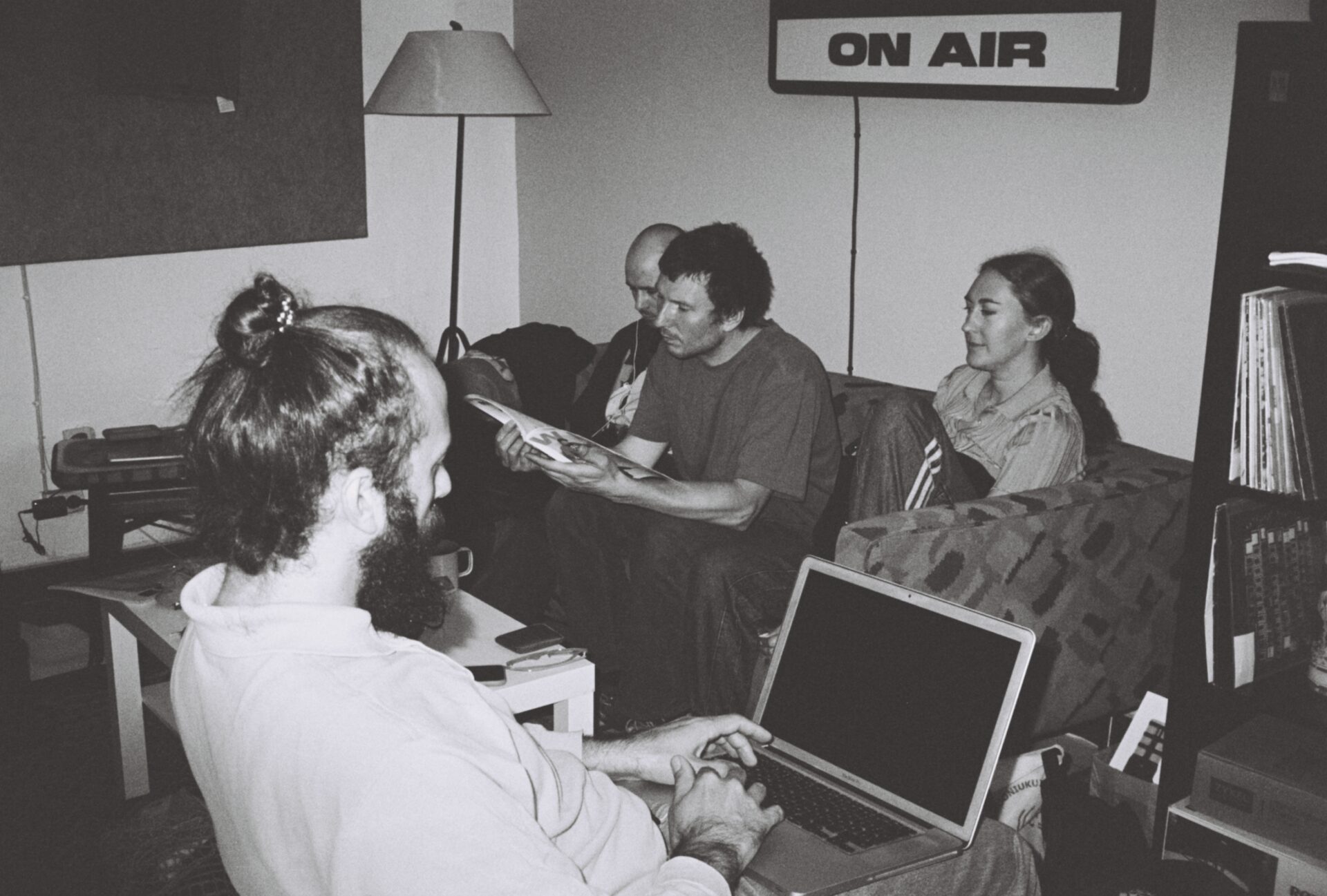 Things We (Can) Do Together: Independent Community Radio & its Fuzzy Networks

“We have no idea what’s gonna happen, but let’s see”, starts the Independent Community Radio Network broadcast from IDA Radio, Helsinki studio. With this phrase, the uncertainty that goes into maintaining a small-scale independent media practice finds its way into the content: even if sometimes embedded in funny, sometimes poetic, and sometimes truly existential, the leap of faith it signals is real. But more than just a doubt, it is also an invitation; a call for the listener to take that leap together. “Let’s see” – what can be the alternative ways of working, playing, and hosting together.

Independent Community Radio Network (later, ICRN) is turning one year this January – and there is a lot to celebrate. Founded by Palanga Street Radio (Vilnius), Tīrkultūra (Riga), IDA Radio (Tallinn), and IDA Radio (Helsinki), the initiative has brought these small autonomous radio stations in the Nordic-Baltic region together: by programming shared broadcasts, visiting each other in their respective cities, and in other ways discussing joys and losses, hopes and systematic challenges. The goal is to build a ‘know-how’ for other do-it-yourself types of radio practices and learn from one another. This makes the network comparable to a small-scale self-sustained labour union, with members working together to increase resilience, promote alternative ways to create and share knowledge, and support others to start an (online) radio.

With help from the Nordic Culture Point mobility fund for networking, ICRN so far has organised two working trips together: one to Vilnius, Švenčionėliai and Riga, and another to Tallinn and Helsinki, where they were joined by like-minded colleagues from Cashmere Radio (Berlin), Resonance FM (London), and NTS (Manchester). Learning from each other during round table discussions, live music broadcasts, sonic and interdisciplinary experiments, walks and studio hangouts has brought up some core questions around what is the independent, community, or autonomous radio practice; how its success can be measured; and what is needed for realising its full potential – both in terms of the everyday working strategies and broader legal or financial support systems.

For the community that enjoys cultural mischief and quirky experiments, definitions can be tricky. And although there are differences – for example, Tīrkultūra leans on the interdisciplinary arts world to create the Unexpected Sources Audio Gallery, IDA Radio sees itself as a platform for the niche local music scene, Palanga Street Radio stands out for its explicitly DIY approach – the mutual understandings are more obvious, even when hard to pin down. Sustainability, integrity, playfulness, independence, friendliness, openness, and diversity are keywords that ICRN radios relate to. Other common attributes are more tangible: the importance of having a physical studio, a place to be with other people; showcasing lesser-known voices; finding a fair way to share labour and maintain oneself financially. As observed by Shelley Tootell (Cashmere Radio) during a talk in Tallinn, “we can be helpful to each other and share experience, even if our paths are not 100% aligned at any one point in time”. If a radio is a shape to mobilise like-minded people and offer forms of sound culture that is felt missing, the real help is to look for the fleeting moments of contact, not the permanent identity markers.

While searching for self is much more rewarding than trying to keep it intact, ICRN dedicates a significant amount of time to ensure the safety and continuity of similar autonomous radio groups. Members agree that the radio network first has “to serve [them]”: that is, allow an enjoyable way to broadcast and share knowledge together. This can only be made possible by sustaining physical spaces, technical setups, and ways to access them, which requires looking for ethical financial sources and efficient digital tools. These processes examine the external and internal value of such grassroots community activities, and ways to balance their independence with sustainability: in other words, ask questions of “what’s our labour’ and “what are our working ethics”. Consequently, notions of ‘growth’, ‘success’ and/or ‘development’ of independent media come forward. Discussions around practical needs to “pay rent and buy toilet paper” are balanced with more ambitious structural changes – where and how to apply for funding or what kind of larger policy could help to have fun while ensuring such creative sounding laboratories keep on existing.

Amongst these many questions, there is a glimpse of answers. In terms of funding, ICRN members agree that the compromise most likely lies in diversifying support sources: using some crowdfunding platforms, working with several different project fundings, organising events, selling merchandise, and finding other forms of community support. While it takes more time to continuously keep looking for ideas and open calls, not to mention the precarity that goes into constantly representing radio as a “project”, alternating funding seems to best align with alternative media methods. There is anticipation for wider support, too. Working together with Reset! Network, a European-wide initiative aimed at “promoting independent cultural and media actors”, ICRN has been forming guidelines for a systemic change that could secure space for similar initiatives within wider policy-making processes. These are a few of many exciting prospects in ICRN’s future, and the future of like-minded independent new forms of media activity. At their core is the sentiment of acting together: trans-locally, uniquely, and in solidarity.

And with the glimpse of answers, there comes a glimpse of hope. The invitation referred to in the first paragraph of this text is a symptom of a broader philosophy behind what a community media network is and can do. To be a good host: to everyone, anyone, and each other; in studios, public forums, and hometowns. Michael Holland from Tīrkultūra has referred to the interconnectedness of people, dreams, and obstacles that makes up ICRN as a “fuzzy network”. It is indeed fuzzy: hard to grasp and constantly evolving. Based on more than a common goal, but a warm fuzzy feeling – one you get when tuning in to a community radio broadcast. One that you get from a support system, or when you find out there are some exciting cultural things happening in the independent media landscape in Europe. ICRN is surely one of them.